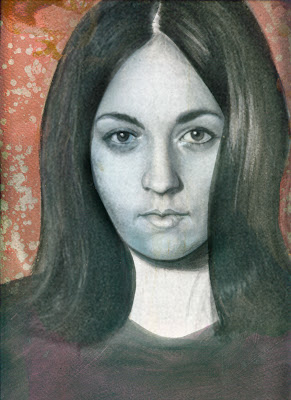 These children that come at you with knives. they are your children. You taught them. I didn't teach them. I just tried to help them stand up. . . .

This testimony was not given in open court contrary to legislation.

Dr. David E. Smith, founder of the free clinic in the hippie Haight-Ashbury District, conducted a four-month study of the Manson “family” long before the Sharon Tate murder case.
“It wasn’t a drug thing,” Smith said. “The trouble was that Charlie was disturbed. He developed a paranoid delusional system that led to violence.”
But Charlie also was very persuasive, particularly with girls and particularly about sex. He felt that “getting rid of sexual inhibitions would free people of most of their other inhibitions and problems,” Smith said.
“Charlie set himself up as the initiator of new females into the commune. He would spend most of their first day making love to them, wanting to see if they were just on a ‘sex trip’ or were seriously interested in joining the family,” Smith said.
If a girl refused any sex request, regardless of how bizarre, it was grounds for immediate expulsion and few members of the cult left voluntarily.
Smith wrote a scientific paper on the Manson family for the spring issue of the Journal of Psychedelic Drugs. He released a first draft to the underground Los Angeles Free Press and confirmed its contents to the Chicago Daily News.
Smith said he first became interested in the unusual “group marriage” commune when members visited his clinic for ordinary medical treatments back in 1968. When the group came south, a Haight clinic researcher came with them and stayed about four months.
At the time the commune consisted of about 20 members, including 14 women.
“He (Charlie) was an extroverted, persuasive individual and served as absolute ruler of this group marriage commune,” Smith wrote. “What he approved was approved by the rest of the group. What he disapproved was forbidden.”
Smith, a physician, is assistant clinical professor of toxicology and assistant research pharmacologist at the University of California Medical Center here. He headed up a symposium last weekend on setting up community free clinics to handle drug-abuse cases.
In his analysis Smith said Manson “said a lot of mystical things that appealed to the girls and everything he said was god’s word to the girls. But he had a lot of serious problems in the area of paranoid delusions.”
“If you know schizophrenics, you know how persuasive they can get and if you are an adolescent in turmoil who is searching for a guru, you can easily be convinced.”
Smith said that “unfortunately, a very large number of guys like Charlie are running around. They seem to be attracted to hip subculture with its freedom and acceptance. But many of them, also, are in mental institutions.”
Smith said the “dangerous thing is that there are hundreds of thousands of adolescent girls in turmoil who are looking for answers and if they got hooked up with a guy like that, they are in trouble.
Bob Rose 1970